Vaping Hash might look easy but it isn’t. Before you put hash in your vaporizer, you have to know the answers to a couple of important questions. Is it possible to vape hash in your vaporizer? Will it mess up your device? So what is a good hash vaporizer? How do I get it clean again after vaping? All these are questions to which we know the answers. We’ll tell you all about vaping hash in this article and we’ll put together a hash vaporizer top 5 for you! 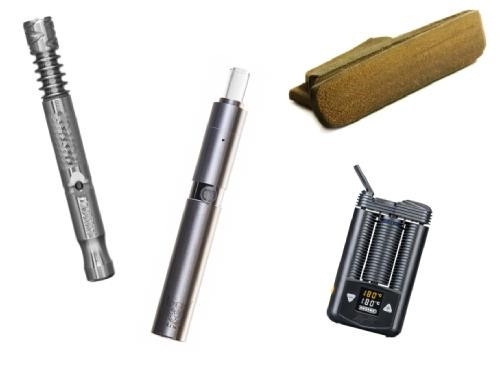 Can you Vaporize Hash?

Many people wonder whether you can actually vape hash. The redeeming answer: yes, of course! But not every device is suitable. Therefore you must properly prepare before going about it. It would be a shame if you had to throw your vaporizer away immediately. Why?

Do you want to vape hash? Then make sure you buy a suitable hash vaporizer. You will find the best models at the bottom of this article. 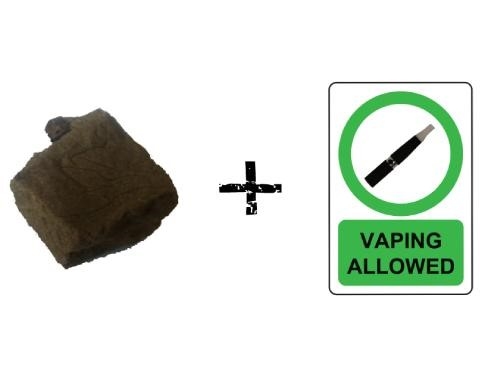 Which Hash for a Vaporizer?

Okay, so you can vapourize hash. But not all hash is the same. The best hash for vaporizers can be found in the coffee shop under ‘pollen hash’. You can also easily make this crumbly hash yourself with Hash Press. Crumbly hash is less compacted and consequently easier to vape. It heats up better and more evenly. Break it into very small bits before putting it in the herb chamber.

Sticky, compacted hash is no joke to get into your vaporizer. The compacted bits don’t heat up in the optimal way. The innermost part is often hardly even warm! Not particularly efficient then. Moreover, producing smaller pieces from this sticky stuff is quite laborious. Even if you manage to break it up into small pieces, it sticks itself back together in the herb chamber. The biggest disadvantage of sticky, compacted hash? After vaping it, it’s almost impossible to get the vaporizer clean again. The residue is very stubborn and the chances are that you won’t be able to ever get it off. Fortunately, there is a solution for this: Vape Wool.

A convenient thing to have around when vaping hash, oil or concentrates is ‘Vape Wool’ from Black Leaf. Vape Wool is degummed hemp fibre which is the ideal solution for vaping hash and other concentrates in a vaporizer. And the best thing about it: you don’t taste the hemp fibre at all. The taste of your hash stays pure and unadulterated.

Vape Wool is so called because the woolly stuff stops hash sticking to the inside of your vaporizer. No more burnt-on residue! Degummed hemp fibre can withstand temperatures up to 240 degrees Celsius. After your vaping session, you simply remove the hemp from your herb chamber and make the hash vaporizer clean again in its entirety. In no time at all, you’re ready for the next session. Vape Wool saves you no end of time and energy in terms of cleaning. 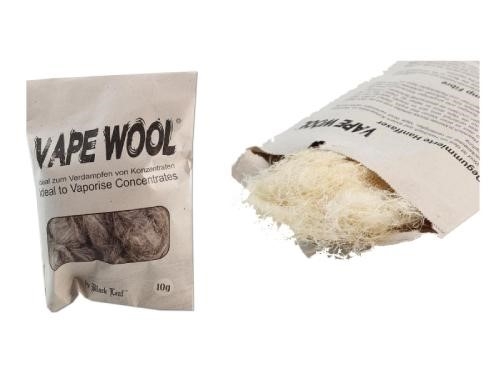 Vape Wool is also good for using with oil or wax. Dip a bit of the hemp fibre in the oil or rub some wax on it. Put it in your herb chamber and all you have to do now is switch the vaporizer on and enjoy! An alternative to ungummed hemp fibre is a bit of dried weed as a bed for the hash. But unfortunately the weed does affect the taste of your vapour. So, if you really want to taste the pure hash, the solution is Vape Wool.

To save you the trouble of looking, we have made a list of the best hash vaporizers. You’ll know that your vaporizer isn’t going to go wrong with one of these models. That’s the main thing. Moreover, we have checked whether it’s practical to vape hash in these vaporizers. Can you clean it properly after vaping? Does it still work properly after a hash vape session? For the sake of certainty, we recommend you always use ungummed hemp fibre. Then you’ll know that everything will stay in order.

Here we have the top 5 Hash Vaporizers:

The German Storz & Bickel Vaporizers are in any case recognised as one of the best brands on the market and that is once more confirmed. This brand has thought of everything. You can actually vape hash with all Vaporizer models from Storz & Bickel (Mighty, Crafty, Volcano Classic, Volcano Hybrid & Plenty). The hash vaporizers are all supplied with Liquid Pads. Metal, heat-resistant pads on which you can put both hash and other concentrates for vaping. It’s really simple. Firstly, allow your vaporizer to heat up. ‘Fill’ your liquid pad with hash or another concentrate and put it in your herb chamber. Vaping hash has never been easier. After the session, extract the liquid pad and clean the herb chamber immediately. Warmed residue is much easier to get off than cooled and burnt-on residue.

Tip: you can also replace the liquid pad with ungummed hemp fibre. It’s also not a bad idea to put an extra screen on top of the ‘filled’ liquid pad. This will stop anything getting into your mouthpiece! With Storz & Bickel you are getting hold of the ultimate hash vaporizer! 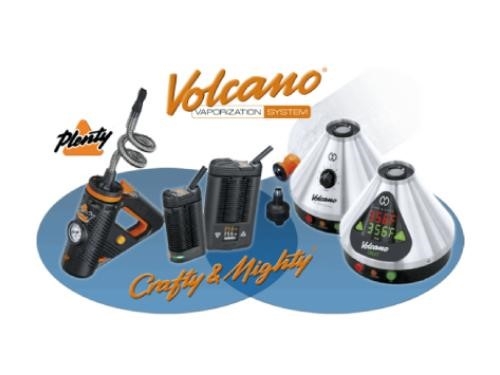 The Vapcap M is a very special vaporizer. In contrast to virtually all other vaporizers, it doesn’t work on electricity. You have to heat it up yourself with a torch lighter! Old school, but really effective. And now the good part: you can also use it as a hash vaporizer. We recommend that you do use ungummed hemp fibre with this vaporizer because otherwise it’s a real job to get it clean. But the quality of the vapour when smoking hash with the Vapcap M is really excellent to put it mildly. According to reviews in various blogs and forums the Vapcap M Vaporizer is perhaps the best one of all for vaping hash.

It’s a bit trickier to fill this vaporizer than other models because the herb chamber is relatively small. Take just a little bit of hemp fibre and place a small bit of hash (0.1 grammes is enough) in between. Place it in the herb chamber of the Vapcap, heat it with a torch lighter until you hear a click and you’re ready to vape the hash. After finishing your session, remove the Vape Wool from the herb chamber and clean it straight away with a brush. It’s as easy as ABC!

The Linx Ember and Linx Hypnos Zero, two good vape pens for vaping hash. They are designed for smoking dabs which completely vapourize. There’s not intended to be residue in the herb chamber. Nevertheless, these vaporizers work well if you put a small piece of hash in, as long as you clean them immediately after your session. Don’t let the hash cool down. Or else cleaning them will be no joke. Using Vape Wool is a good solution although the herb chamber is so small that there won’t be much room left over for hash.

For vaping hash in the Linx Ember or Hypnos Zero you unscrew the mouthpiece from the atomizer (herb chamber) so you can then fill this. Please note: the Linx Ember has room only for a very small quantity of hash. Look on it as a one hitter. Fill the herb chamber with hemp fibre and hash, allow the pen to heat up and vape your hash without any problem. After the session, empty the herb chamber and you can easily wipe off the warm residue. The hash couldn’t be nicer because the herb chambers are completely sealed. Thinking of Buying the Linx Vape Pen? Check out the offer!

The Dr Dabber Switch is one of the few vaporizers with which you can literally vape everything. And that includes hash! This vaporizer actually has all the elements which a normal vaporizer doesn’t have. It is a unique, induction vaporizer - the first on the market. In addition, the Dr Dabber Switch cleans itself completely. After use, you just press the button to put it into the proverbial ‘cremation state’. Moreover, you can remove the entire herb chamber/cup. Cleaning was never this easy, it does it nearly all itself! For exactly that reason, this is actually the number 1 if you want to vape hash. But it comes at a price.

Want to know more about the extremely multifunctional Dr Dabber Switch? Find all the information here! 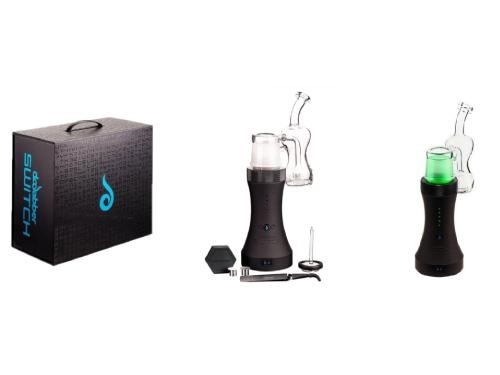 The Pax 3 Vaporizer is one of the best on the market. It is extremely compact and looks magnificent. Anyone not in the know, wouldn’t see that it is a vaporizer. The Pax 3 is suitable for dry herbs (weed), hash and other concentrates. This hash vaporizer is provided with a special herb chamber in which you can vape sticky substances. We have tried it. The vape quality was perfect but cleaning was a difficult task. At least, that was the case until we discovered ungummed hemp fibre!

For vaping hash with the Pax 3, you need a hotbox/concentrates holder, which you only get if you purchase the so-called ‘complete kit’ from Pax. Fill the hotbox with some hemp fibre, lay the hash on top and cover it again with a bit more hemp fibre (make sure the holes stay free). Allow the vaporizer to pre-heat first. Has it reached the high temperature? Place the hotbox underneath the Pax and the vaping hash can begin! After the session, we recommend you clean the Pax as soon as possible. Do you use Vape Wool? Then it’s not a big deal. If you don’t, then cleaning will be quite an effort. Please note carefully: the hotbox is red-hot after your vaping session!

Have we convinced you about the possibilities and you’re now going to buy a hash vaporizer? At Dutch-Headshop we have a wide range of hash vaporizers waiting for you. Check out all the vaporizers and search for one of the above models!