Hash is, just like weed, a product of the weed plant. The difference is that hash only contains the concentrated parts of the flowers, for example by sieving. You can find hash in every corner of the world. The region and the method of preparation are responsible for countless types of hash available on the market. From cubes to balls and from crumbs to sticks. In this article we look at the most common types of hash and see what the differences are.

A list with the types of hash can be as long or as short as you have time to put it together. For this list we have limited ourselves to the most common hash types in the Amsterdam coffeeshops. Hash can be found all over the world. Although Morocco and Afghanistan are known as real hash countries, there is also special hash available from Tibet, Mexico and the Philippines, all with slightly different methods of preparation.

A short summary for the inexperienced. Hash is an extract of weed, in which the THC-rich parts of the plant are separated from the THC-poorer parts. This is done by sieving, kneading, pressing, heating and freezing with or without tools - in short, a whole range of operations. You can make all these types of hash yourself from any weed. Names like Afghani or Kush refer in the first place to the area of origin. The type of weed that is used, determines the effect of the hash.

That’s the reason we won’t be talking about the different effects of hash – it just depends on the type of weed you use to make hash. That makes the most important difference when it comes to the effect.

Choose a THC-bomb such as Wedding Cake or take a traditional Northern Light to start making your own hash. Or go crazy and make your own CBD-hash with Auto CBD White Widow. The balanced high of this autoflowering weed will appeal to both recreational and medicinal users!

Want to know more about the differences between hash and weed? Read this article.

Polm is extremely finely sieved hash with a distinctive sweet taste. Especially when you choose a sweet weed as raw material. Polm is crumbly, a little sticky and light in color. To make polm, you need a very fine sieve. Even the gaps of a pair of tights are often too big. All hash can be made from both weed and cuttings. To make polm you crumble your weed or cutting waste and place it in a cup or jar. Span the homemade sieve over the jar and shake it. By shaking, only the trichomes can pass through the sieve. With a brush you can brush the trichomes from the sieve if something is stuck on the outside. Don't feel like doing it yourself? Take a ready to use hash shaker.

Trichomes are the resin glands that produce cannabinoids such as THC and CBD. Therefore, the percentage of THC increases when you separate the proverbial chaff from the corn.

On an industrial level (read: in coffee shops), the pollen or trichomes are separated from the flowers and leaves in a rotating drum or pollinator. According to a study by the Trimbos Institute [1], polm contains an average of 15.7% THC and 6.5% CBD. 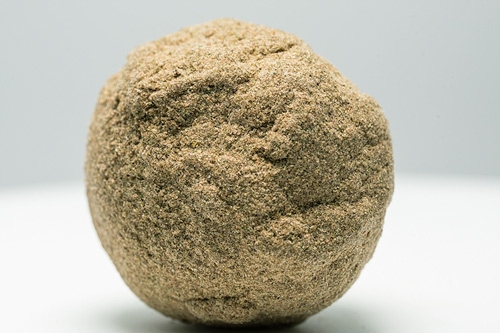 Super Polm can contain up to 50% THC in exceptional cases, but the percentage is often lower, between 1.7 and 33%. Depending on the type and quality of weed used, the average percentage is a few points higher than for polm (17.4% THC and 7.2% CBD). It is made from moist plant material which makes a block of super polm nice and sticky. Polm and Super Polm are originally from Morocco.

This is a pollen hashish that is often lightly pressed. It is compact, aromatic and burns relatively quickly. The unpressed zero is often richer in taste and effect because, strangely enough, some of it can be lost during pressing.

These are all names for the same kind of polm hash. Twisla also originates from Morocco and is part of the zero zero group of hash species. In Morocco, the names of hash types also indicate the quality, but it is difficult to say which hash types have the best and the worst qualities. This is because every coffeeshop has one or more suppliers and it depends on to the person who made the hash and the equipment they use to make it.

This type of hash is named after an important trading place in Morocco. Rougher sieves have often been used, so this hashish type is usually less concentrated and has a stronger taste. The measured THC percentage can vary considerably; from 1.9 to about 32%.

By the way, do you want to vaporize hash in your vaporizer? Choose a vaporizer that’s suitable for this.

Charas is the Indian word for hash. However, there is a difference in the way it is prepared compared to, for example, typical Moroccan hash. Indian charas is made by grating or sieving live plant material and rolling the remaining pollen by hand into sausages (soft hash) or sticks (hard hash). Traditionally, charas is smoked with a chillum. This is a special weed pipe that is popular among Indian Sadhoes (monks). Nepalese charras is written with a double R and has a varying quality. It contains an average of 13.4% THC and barely any CBD.

Making your own charas is easy, but you should be aware you're going to get your hands dirty. By rubbing and rolling fresh buds between your clean hands, a dark, sticky residue will appear on your hands and fingers. Once there is enough on your hands, put away the weed top and rub it until you have a ball. You can roll the ball into a sausage; just what you find convenient.

Ofcourse you make charas from Indian and Nepalese weed. An excellent variety is our Master Kush, but Sour Diesel is also particularly suitable.

The best known dark hash is the Afghan / Afghani, which is made from Afghan indica weed plants. This black, dark green or deep brown hash can be found as balls, cubes and sausages. Afghan is baked and pressed over a wood fire. Traditionally, Afghani hash is mixed with animal fat to improve its consistency. As a result, the smell of this variety is also very distinctive. Whether this also happens in Europe is still unclear. Mazar-i-Sharif is considered the better Afghani hash variety and is named after the mountain area in the north of Afghanistan. The average THC percentage of Afghan in the coffee shop is 7.7 percent and the CBD content is an average of 6.3%. 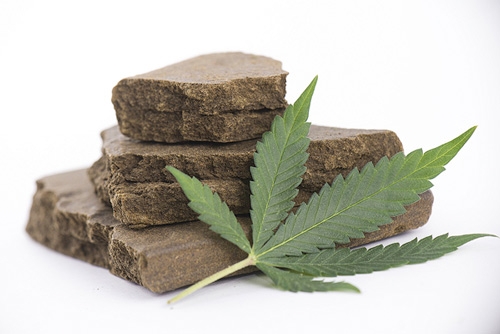 Ice-O-Lator is a special form of hash because it is prepared with, you guessed it: ice! Ice-O-Lator or ice hash is a strong type of hash that can contain up to 80% THC, but that demands that you work meticulously. If you leave it to professionals such as the people at Amsterdam Genetics, you can order some amazing cubes of hash. At Boerejongens in Amsterdam you can find White Choco Block and AK-020 Ice on the menu. That's Ice-O-Lator hash of these two types of weed, of which you can buy the weed seeds from us: AK-020 and White Choco. 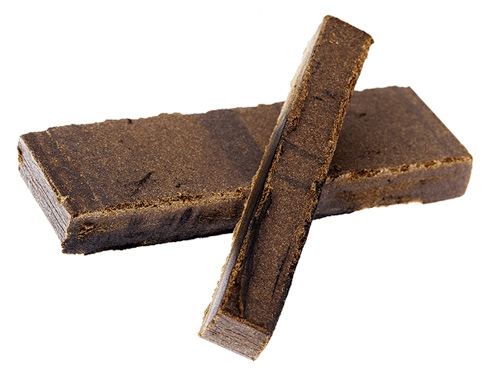 The cannabinoids are extracted by means of ice water and a set of filters, so you don't lose the flavour of the weed. Ice-O-Lator can be either crumbly or rolled into a ball or pressed into a cube. How crumbly the hash is, depends on several steps in the production process. That sounds complicated, but it's not. You can also make Ice-O-Lator yourself as long as you have the right supplies. This can be done in a modern way with the Bubbleator. You can read how to do this in this step-by-step plan:

Rosin is on the edge of what we can still call hash. This extract is made without the use of solvents. Butane Hash Oil (BHO), on the other hand, is an extract obtained by using butane or dimethyl ether to dissolve the cannabinoids. Rosin is an extract of weed that resembles real hash in its preparation. You squeeze the cannabinoids out of weed, but under high pressure and temperature. You can read how to make BHO and rosin, in these sections of the course on making dabs: