These are the Ideal Vaporizer Temperatures for Weed and Herbs

You’ve bought a vaporizer. Great, because that’s the first step on the journey of discovery to know what cannabis can mean for you. The next step is to know what temperature you should use. That’s because on the majority of vaporizers you can adjust the temperature. Next you’ll read about the three dead easy temperatures for weed. You can actually influence the high with these settings. Use this article to look up which temperature you need and why. Whether you want to vape weed or herbs. 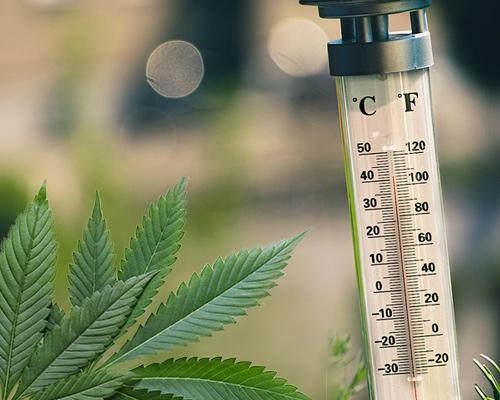 But first back to weed. What will it be? High or stoned? Let’s get straight to the point. 160°C for a mild high for daytime, 175°C for a sociable, powerful high and 205°C to get completely stoned on the sofa. Three temperatures for directly getting down to business!

By adjusting the temperature of your vaporizer, you can influence the way in which weed ‘hits’ you. Because, first and foremost, it’s the substances in weed which determine whether you become relaxed or energised. Read on in this article to find out why we chose these temperatures.

Are you still looking for a vaporizer? Watch our product range and be surprised by the various options!

The Composition of Weed

During its growing and flowering periods, the cannabis plant produces a cocktail of thousands of substances. You probably know already a couple of the main ones - THC and CBD. We call these substances cannabinoids. You’ll find a lot more in the plant, such as CBG, CBC, THCV and delta-8-THC.

As well as cannabinoids, weed also contains other flavonoids and terpenes. These determine the smell, colour and taste of your weed. However, what many people don’t know is that terpenes in particular can influence the effect of cannabinoids. 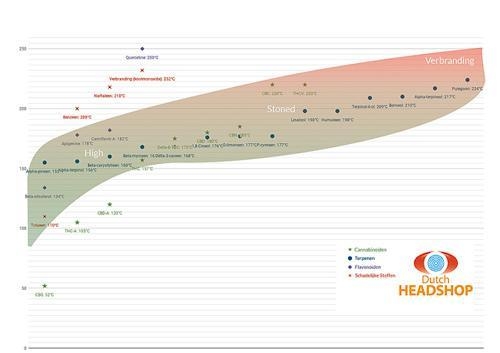 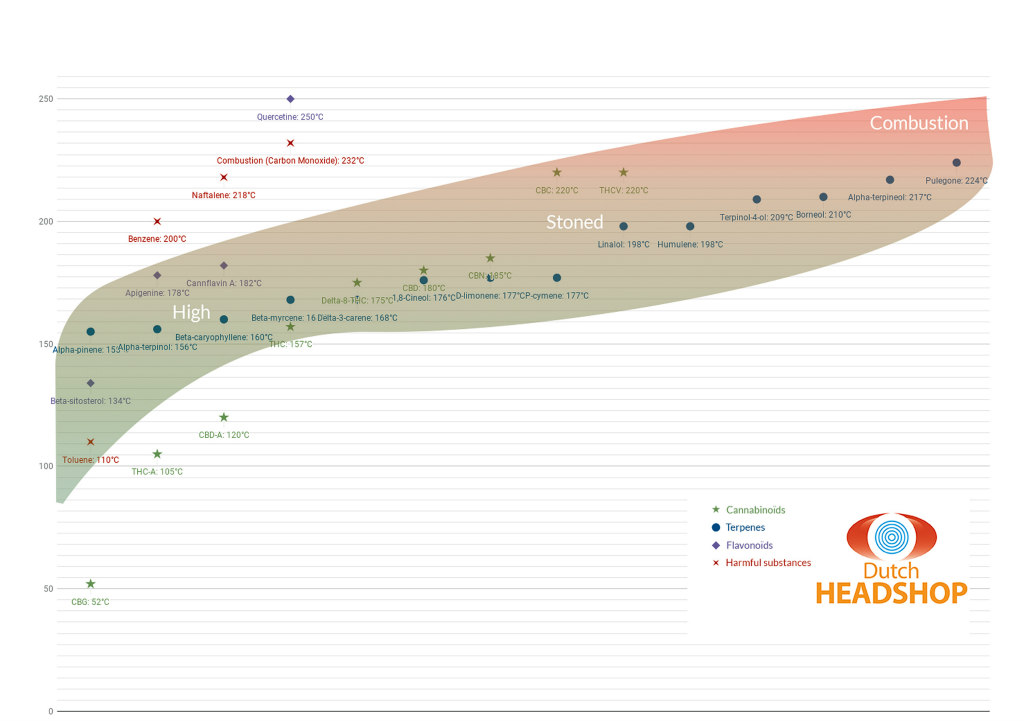 Click on the image to enlarge it. Are you looking for an energising high or would you rather get relaxingly stoned? The temperature influences how you feel!

In common parlance we say that you get high or stoned from weed. We understand that the terms are often used interchangeably. Yet they are two different things. High is an enlightening, stimulating and happy sensation that you feel in your head. Stoned, in contrast, is a physical feeling. Languid, relaxed and benumbed are some words used to describe that. We ourselves think though that it’s more nuanced than that. Weed contains an awful lot of different substances and each variety of weed has a slightly different composition.

It’s claimed that THC is the ultimate boss of weed. That is not completely accurate. It is the combination of all the substances present which you imbibe that determines the effect. One substance may reduce the effect of THC while another promotes it. 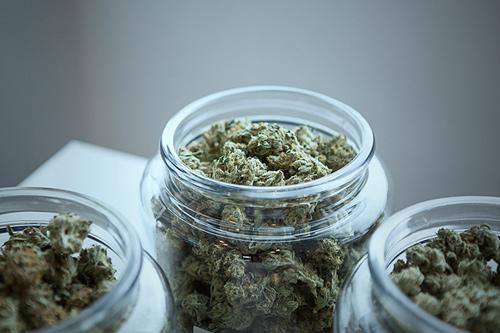 The funny thing is that each substance vaporizes at a different temperature. This means that by setting the temperature higher you imbibe more components of the weed. Some of these substances are desirable. CBD is a good example of one. But it’s not all win-win with weed. At higher temperatures, harmful substances can also be released. For this reason we recommend that medicinal users in particular keep the temperature low. At 200°C harmful benzene starts to vaporize. Are you a medicinal user? In that case don’t allow the temperature to exceed 198°C. That isn’t necessary for still getting the benefits. 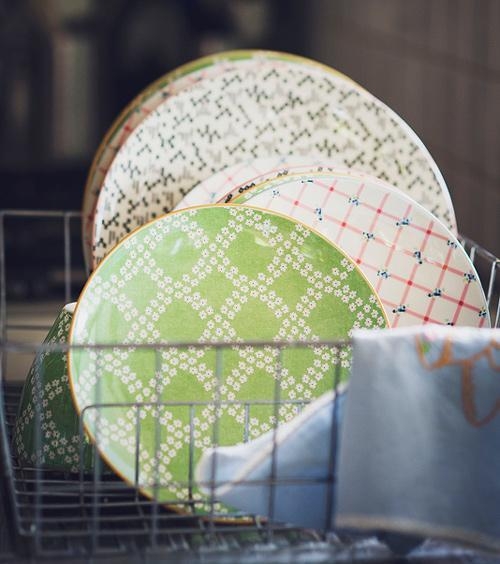 For a smile on your face, enhanced focus and subtle relaxation - Specially suitable for during daytime.

Do you like to take a drag from your vaporizer during the day but still have a 101 things to do? Then set your vaporizer to 160°C. Around this temperature you will in any case have three important substances entering your mouth.

Low-temperature vaping is great when you want to still be able to get things done. The combination of THC with pinene makes you alert and sharp. Household chores or a good conversation can still be successfully performed.

Self-cultivation tip: A top weed that’s good for during the day is Hiydrow from MM Genetics; even if you surreptitiously set the temperature a bit higher. 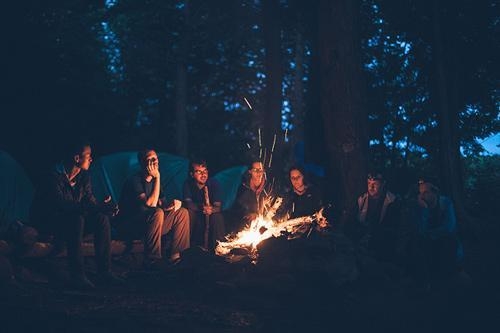 Feel at your best, open up your senses and let your body tingle - The ideal temperature for a laughing fit and the munchies which works well at parties.

Forthcoming party with friends? A vape temperature of 175°C goes down well around the campfire and for playing games. Once you get over the laughing, there’s a good chance of getting into the discussion of philosophical subjects. Be sure to get in plenty of snacks. This temperature is also great for gaming or for watching a weird film. Get double the enjoyment because these substances now vaporize together:

*CBD also begins to vaporize now. CBD has a vaporization range between 165°C and 180°C. The high now begins to give way to a more stoned feeling. Note that this isn’t the result of the CBD but due to the complex interaction between all cannabinoids and terpenes which are now released together. It’s mainly myrcene in combination with THC which provides you with the stoned feeling.

Self-cultivation tip: A sociable or creative high? Both Purple Haze and Auto Amnesia Haze are particularly good strains of weed for during the day and at a party. These Sativa strains are low in myrcene which means they tend to give you a high feeling rather than a stoned feeling. Most kush, cheese and skunk (Indica dominant) contain relatively more myrcene and THC which makes them popular with stoners. 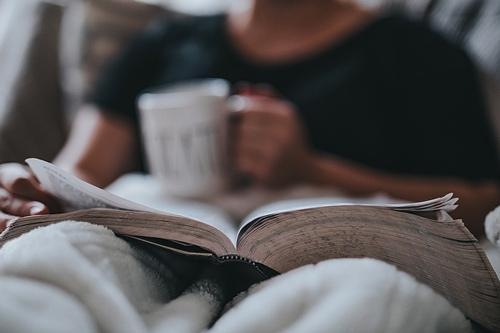 Time to chill! Sit back, relax and feel your eyes getting heavier. Let interesting thoughts come and go again. And importantly: calm the signals from your body - Perfect for the end of the day.

At the end of a long day, you get a moment to yourself. You’ve got hold of a nice kush and you bring the vaporizer into action. Our tip: set it to 205°C for a rapid dose of relaxing linalool and humulene on top of a large amount of THC and CBD - this is the way to chill out on the sofa. At a temperature of 205°C the substances we mentioned earlier vaporize much faster and you also inhale the following things:

Self-cultivation tip: You’re definitely looking for the weed seeds which have the highest THC percentage. Then you should get Pineapple Chunk from Barney’s Farm. This weed has been tested at 25% THC! 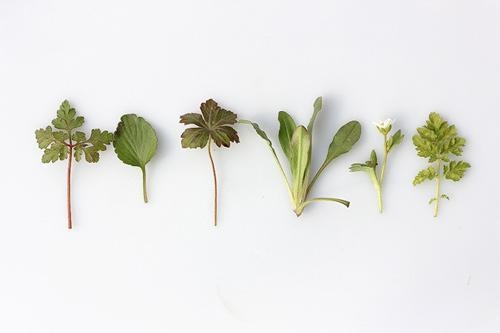 An article about the best vaporizer temperatures would not be complete without discussing herbs other than weed. There’s hardly any herb that you can’t put in the vaporizer. As long as they’re dry herbs (definitely no essential oils! These are harmful to your vaporizer and to you because they are much too concentrated).

Herbs too contain various substances which are all released at different temperatures in your vaporizer. Without discussing all herbs in detail, we want to give you some suggestions for good vaping temperatures. Check the bar chart below. 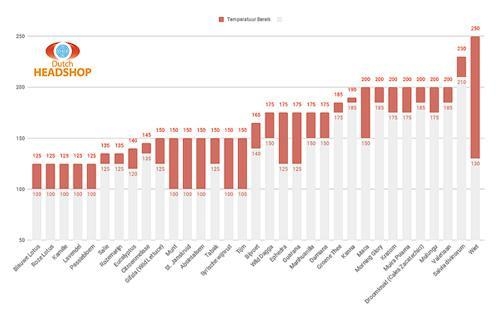 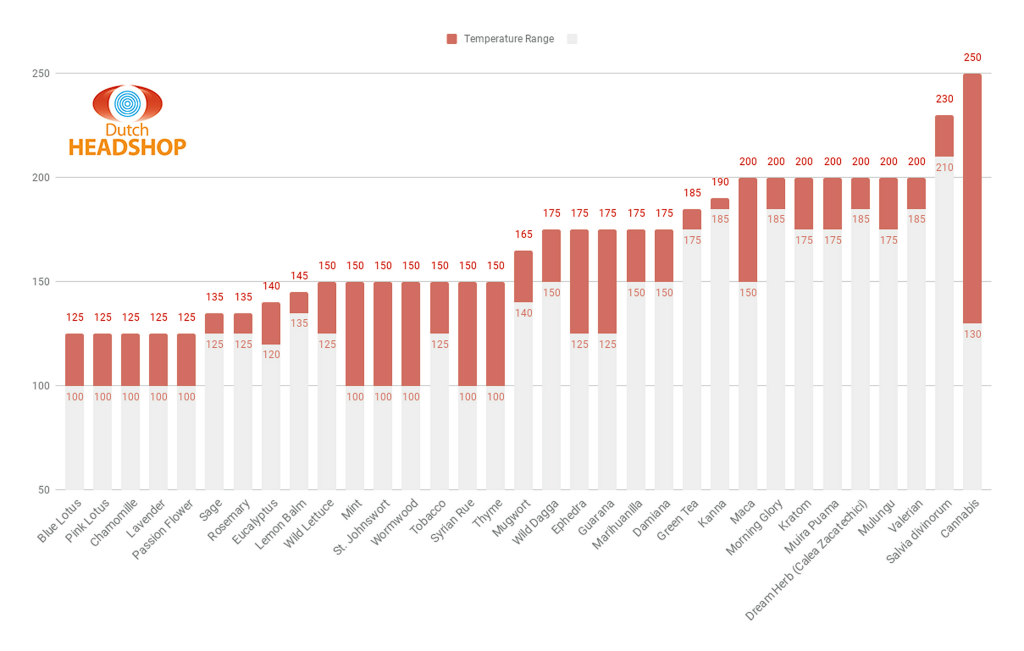 Click on the above graphic to zoom in on it. In the red you see the range of substances which are released at these temperatures. Our tip? Set your vaporizer somewhere in the middle of the range and you’ll always be OK!

Blue Lotus and Passion Flower vaporize at a lower temperature. At 112°C you are already getting the desired effects. The relaxing Mulungu vaporizes at a much higher temperature of approximately 185°C. The tripping herb Salvia contains Salvinorin A - an insanely powerful hallucinogenic substance. Salvia also works great in a vaporizer as long as you can set your vaporizer to a temperature of 220°C.

Are you curious about which vaporizer herbs we have in store for you? Check the wide range! 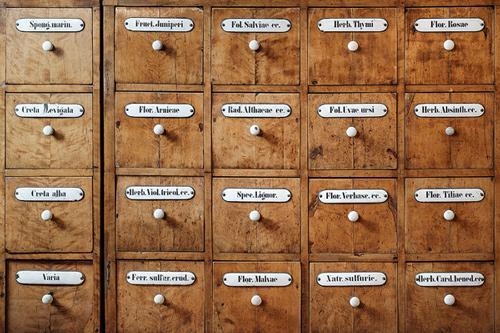 You don’t have to remember all the numbers from this article. Just remember your favourite temperatures. Don’t want to bother with that either? Then we recommend you get a user-friendly vaporizer with presets such as the Zeus Arc GT. Even simpler is the DynaVap VapCap M; a beautifully finished vaporizer which doesn’t work on current but by holding a flame to it!

Incidentally, did you know that the terms Sativa and Indica don’t always say everything about the effect of the weed? Read how it works in this article and discover the real differences: “Indica Vs. Sativa - Stoned or High? What Effects can you Expect? “

Disclaimer: to keep this article easy to understand we have used boiling points - the temperature at which a substance readily converts into a gas. In practice, substances will also vaporize at temperatures lower than these. Even solid substances can convert directly into a gas (evaporate). The hotter it is, the more quickly a substance vaporizes.

“Tailoring Your High: Compounds in Cannabis, Properties and Boiling Points” - available at: