Conduction versus Convection Vaporizers: What is the difference?

For the seasoned vape fan it’s all crystal clear but for the beginner it’s strewn with difficult words. Conduction or convection vaporizer? These are words that describe the heating method. How does your new vaporizer heat the contents? We compare the pros and cons of different types of vaporizers. 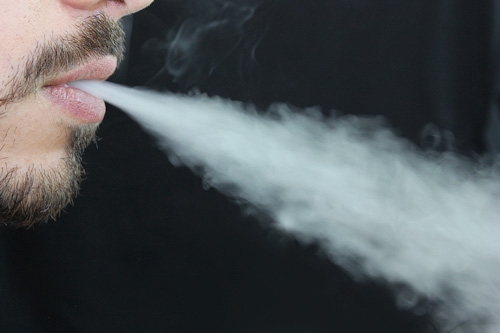 Convection versus Conduction How does it work?

Convection is a fancier word for heat flow. It’s a form of heat transfer that takes place with a liquid, gas, or in this case, air. The best example of convection is the weather. In accordance with the laws of physics, hot air flows towards cooler air (and rises). Conduction is also referred to as transmission. For this to occur, you need a solid substance. A good example is burning your hands on the hot handle of a pot just taken off the hob. The handle hasn’t been in the fire but the base of the pot has. To round off this brief science lesson, let’s consider radiation. This is what makes being in the sun enjoyable. In the sunshine, it’s always warmer than in the shade.

But how is this educational story relevant to your choice of vaporizer? There are vaporizers that work by hot air (convection) and vapes that heat your weed or herbs directly by means of a metal plate (conduction) which is often mounted to an electrically heated ceramic part. There are also ingeniously designed vaporizers that employ both forms of heating. These are called hybrid vaporizers. 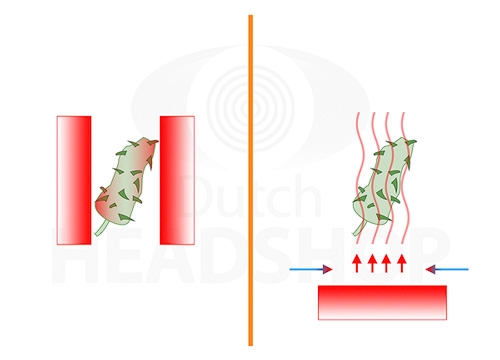 The vast majority of vaporizers on the market make use of an oven. The oven is, at the same time, the herb chamber. Your herbs are in contact with a hot surface. And it’s precisely at this contact point that your weed is heated most rapidly.

+ Full and dense vapour clouds, even at lower temperatures.
+ Often cheaper than convection vapes or hybrid vapes.
+ Often more economical on energy and so the battery may last longer. In practice, the batteries tend to be smaller and thus whether or not a battery charge lasts longer varies from vaporizer to vaporizer. 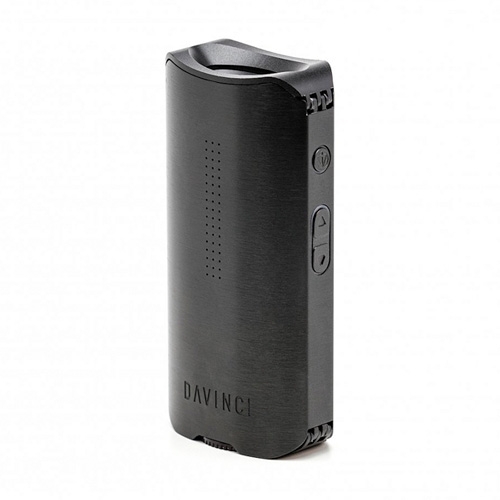 One of the slickest-looking conduction vaporizers on the market: the DaVinci IQ2

- Uneven heating can lead to less accurate temperature control, especially in larger herb chambers. For that reason, the herb chambers are often smaller.
- As a result, the vaporization is more uneven and it’s a bit difficult to work out exactly which substances are released.
- Can be harder to clean because your herbs are in direct contact with the hot surface for a prolonged time.

In these guys, the oven is physically separate from the herb chamber. There are conduction vaporizers that are claimed to work by hot air. Until you put the herbs into a chamber that feels suspiciously very similar to the inside of an oven when you touch it accidentally. Then you never open the herb chamber again when it’s ‘at temperature’. A hot air, or convection, vaporizer is usually a bit bigger because it has a longer vape channel in order to separate the herbs from the heat source.

+ Pure air that ensures the vapour tastes of the vaporizer’s contents (and not of the vaporizer itself) - especially with a glass or a gold (leaf) vapour channel.
+ Weed or herbs are heated evenly, so hot edges and unvaporized bits are not a problem.
+ The sensitive heating element doesn’t require cleaning as the content doesn’t come into contact with the element. 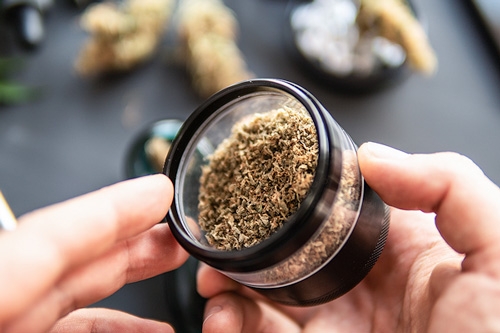 With a convection vaporizer in particular, it’s important to keep your weed fine and aerated. Don’t ram it in!

With both conduction and convection techniques, hybrid vaporizers are a combination of the two. As a result, the herb chambers are often larger in size. Are these units the best option then? Check out the pros and cons and make up your own mind:

+ Both pure vapour and dense clouds. Hot air ensures that all the contents are heated evenly and the direct heating produces the powerful hit that smokers find great.
+ You regulate the intensity of the hit by means of reliable temperature control.
+ Modern models can even be very small.
+ High-quality device and easier to clean than conduction vaporizers. 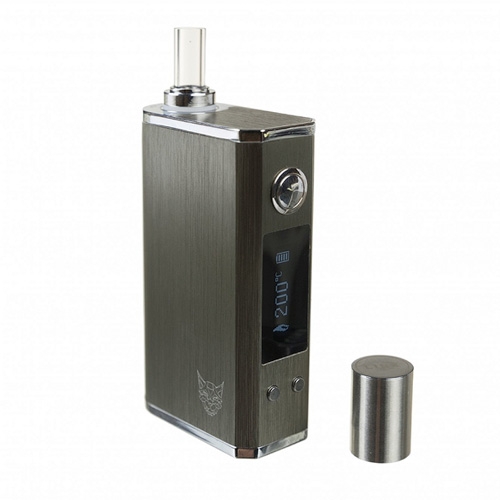 The Linx Gaia - a luxury hybrid vaporizer that fits in the palm of your hand.

Both conduction and convection vaporizers have their plus points.

Now we want to talk about the vaporizers that don’t quite fall into these categories. Vaping doesn’t have to be expensive at all. As long as you protect your weed from an open flame, the chance of combustion is minimal. Thus, you can still vape for under 20 euros with the Eagle Bill Shake & Vape. In essence, this is a glass bulb attached to a tube in which you can heat your favourite herbs with a lighter that you hold up to the underneath. Simple, but oh so effective! 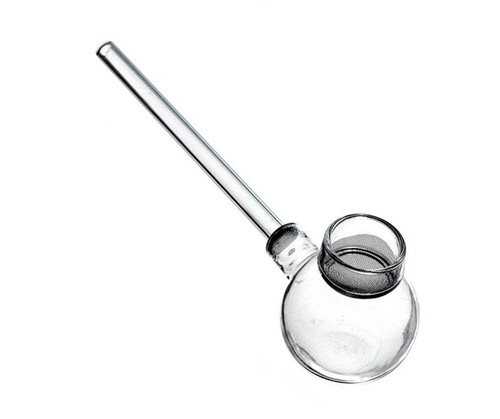 Eagle Bill Shake & Vape - Flame underneath and away you go!

What do you think about the Vapcap M from DynaVap? That’s a vaporizer with ‘temperature control’ but no battery. How? This smart vaporizer has a metal plate that always clicks as soon as your vaporizer reaches the correct temperature. Also heated by lighter and you turn off the flame as soon as you hear the click. It’s no bigger than a pen. Ideal, isn’t it? 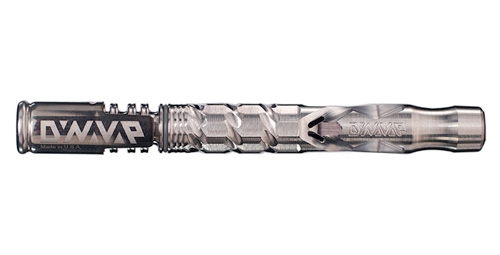 *CLICK* and it’s ready for use: The Vapcap M from DynaVap.

We’ll finish up with yet another difficult word. Induction. A technique that is relatively new to the vaporizer market is electromagnetic induction - the same technique as used in your induction hotplate! A coil induces a magnetic field which, in turn, heats another contact-free coil. Introducing the Dr. Dabber Switch - a vaporizer that has travelled back in time to provide you with dense vapour. It can vape anything. From dry herbs to hash and the nastiest, stickiest weed concentrates. 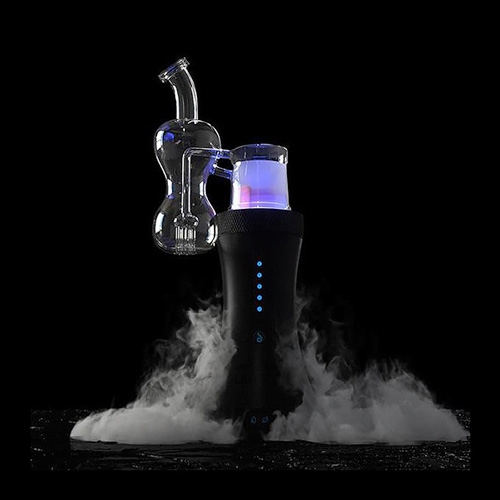 The Terminator amongst vaporizers: the Dr. Dabber Switchinduction vaporizer.

Which is better: Conduction or Convection?

We’ll leave this for you to decide. You’ve now read through the pros and cons of various heating techniques. Both conduction and convection Vaporizers have their plus points but neither are perfect. Do you want a convenient, electric vaporizer for a reasonable price or are you into dense vapour and not that bothered that it can be quite sharp? In both cases, go for conduction. Prefer mild vapour which is that bit cooler when you inhale it? Then opt for a convection vape. Unable to decide between the advantages and wanting dense vapour that nevertheless feels mild? Then choose a hybrid vaporizer.

Interested to know what the nicest temperatures are, irrespective of the type of vaporizer? If so, check out this blog. Slight preview: you can influence the effect of weed, hash or herbs by playing around with the temperature. Whether you vape weed or other herbs, there is going to be an ideal temperature that suits you.