The best Grow Schemes & Spectra: All about Light when Growing Weed

There's an incredible amount of information to be told about indoor growing. But growing weed indoors has one big difference with growing it outdoors: the lack of light. That's why it's essential to grow under artificial light. In this article we will dive directly into the subject matter. Use this article as a reference, to brag to your friends that you know better or to create a plan of action if it's still too cold for weed plants in the garden. Which lighting is the best? Let's go. 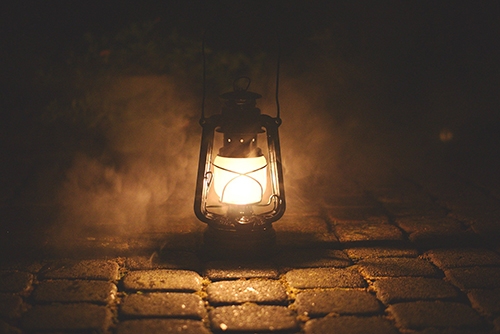 Back to the basics. Our planet will orbit the sun at an angle within a year. That angle determines the seasons. As a result, the days in winter are shorter than in summer [1]. Plants have evolved in such a way that they grow when there's more daylight every day. In this way the plant knows that it will stay warm enough to survive. This is why you see more green in spring than in the grey December month.

In the third week of June, something special happens. Here in the northern hemisphere the day is at its longest. That point is called the summer solstice and often takes place on or around the 21st of June. When the days get shorter again, some plants are stimulated to move on to the reproduction or flowering phase. These are the so-called short day plants, such as our beloved weed plant. The exception to the rule are the autoflowers. They go seamlessly into the flowering phase, regardless of the shorter days. 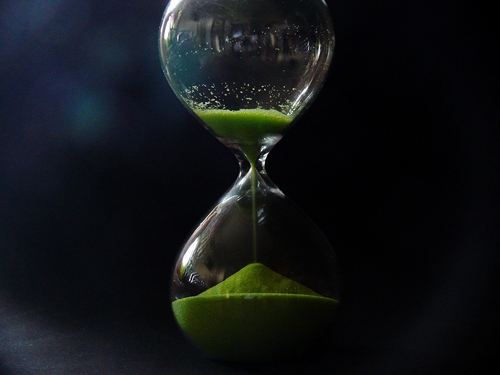 How much light do weed plants need? That varies according to the phase your plant is in. During the growing phase they need more light than during the flowering phase. In fact, as long as the night is shorter than 10 hours, a weed plant will remain in its growing or vegetative phase and will therefore not flower. Basically: do not produce any weed. Exceptions are the autoflowering plants, which we will focus on later.

The night is important to give your plant rest. This way the plant produces substances that it cannot produce during the day. It is therefore important that the darkness is uninterrupted. Do not turn on the light during the simulated night to take a look, because this will make it very difficult for your weed plant [4]. The most commonly used grow schemes are listed here:

18/6 - Eighteen hours of light and six hours of darkness is commonly used for the growing phase.

20/4 and 24/0 - The longer the plant receives light each day, the faster it can grow. During the growing phase these long-light schedules are used in combination with fast flowering weed plants or with the Sea of Green (SoG) growing technique, where it is profitable to grow as fast as possible, one after the other. Because the plants don't get any or hardly any rest, they stay smaller and it takes a considerable amount of extra power to keep the lights on longer. Unless you have a large (and therefore illegal) SoG cultivation, is the profit in yield in nine out of ten cases not high enough to justify this cultivation scheme.

12/12 - Twelve hours of light and darkness is the most common flowering scheme.

6/18 - Are you in a hurry and do you want to let your weed plants flower in turbo mode? Then choose the opposite of the standard growing scheme and turn the light on for 6 hours and off for 18 hours in one day. Although your plants will remain smaller and your yield will be lower, the plants will sense a sudden end of the season. This makes them want to reproduce like crazy and the ladies will flower faster.

Tip: it helps to lower the temperature to between 15 and 17 degrees Celsius in the 6/18 schedule. This simulates the arrival of winter.

The fact that you don't need a growing scheme to grow your autoflower is obvious. After all, that is the quality of autoflowering weed plants above the so-called photoperiod weed plants. But that does not mean that your autoflower will grow well behind a small window in February. Every weed plant needs enough light. So do your autoflowering plants. "Suitable for indoor growing" doesn't mean "does well next to geraniums". Grow under a decent lamp and take good care of the plant. 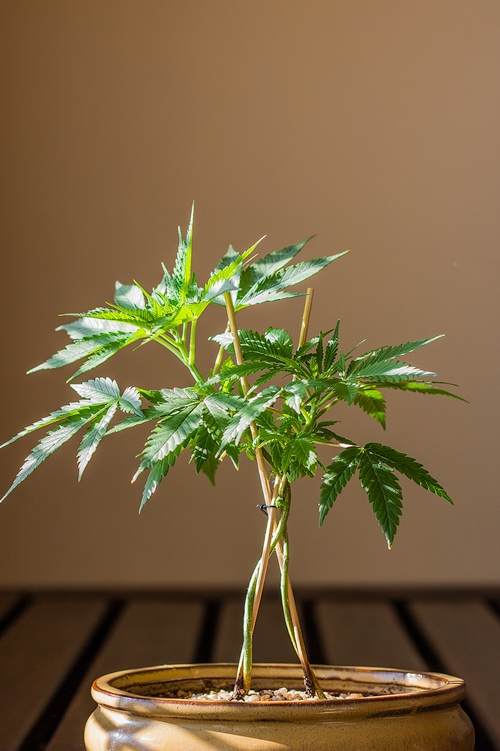 A weed plant behind glass will never reach the potency or yield that you reach with lamps or direct sunlight.

Do you still want to grow behind glass without a lamp? That's possible, but wait until at least mid-April with an autoflower to place it on the windowsill and turn the pot frequently. Autoflowers are also very suitable for growing in the garden. Put them outside after the 15th of May and benefit from maximum sunshine in spring and high season. In this way you save your plants from the damp autumn and prevent mould.

Use a 20/4scheme for the highest yield if you are growing an autoflowering weed plant indoors, or a more price-conscious and environmentally conscious 18/6over the lifetime of the autoflowering plant. The net gain of two hours of light per day is not outweighed by the extra cost of lighting.

The color of the sunlight

What you should also know about sunlight is that the colour of the light is slightly different depending on the season. This is the result of the angle between the sun and your weed plant. In autumn the sun is lower in the sky than in summer. The lower position of the sun causes the light to become warmer (redder) as winter approaches. Weed plants will therefore expect just a bit redder light during their flowering phase than during the growing phase.

The colour of the light is different in summer (left) than in autumn (right). Plants are completely adapted to that.

The Growing Phase: Plants like to absorb blue-tinted light for healthy leaves and strong plants. In spring the sun is relatively high in the sky. This causes more light with a blue colour to pass through the atmosphere. Plants have evolved to be sensitive to this during the growing phase. Cannabis therefore naturally captures a lot of blue-tinted light from the sun in spring and summer. Growers therefore choose T5/T8 light fixtures, compact fluorescent beams or metal halide lamps that emit all cooler colours of light.

The Flowering Phase: As soon as the sun passes the summer solstice around the 21st of June, it is lower in the sky every day. The lower it is, the less blue light can pass through the atmosphere. As a result, the light changes to a warmer colour in autumn. However, recent research has shown that green tinted light also influences the plant's growing and flowering. But until we can really tell how much added value this has, we recommend the following wavelengths during the flowering phase of your plants:

There is a lot to explain about growing under LED. LED has a number of advantages, but also disadvantages compared to HPS and metal halide lamps. Fortunately, we have already listed the pros and cons of LED cultivation for you in this article. One of the advantages is reduced power consumption, of course. On the other hand, there is a lot of difference between different LED growing lamps, which means that they do not all give the same amount of light output. Fortunately, the Minigrow Grow Box is equipped with a panel of high quality LEDs in exactly the right colours for growth and flowering, so you don't have to worry about that.

Why Blue and Red?

Plants grow by means of photosynthesis. Under the influence of light, water and carbon dioxide are converted into sugars that the plant needs in order to grow. The leaf contains pigments that act as the lungs of a plant. These pigments are called chlorophyll and give the leaves their green colour. 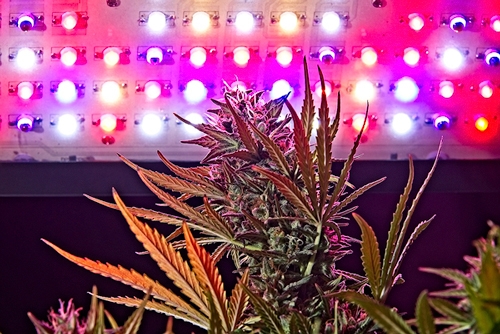 Each leaf contains two species of chlorophyll. Chlorophyll A and chlorophyll B. Chlorophyll A is sensitive to blue light with a wavelength of 400 to 500nm. Blue light prevents weed plants from stretching and leaves from shrinking. Plants grown under blue light usually stay shorter, have dark leaves and have many leaves. Blue light is also important to open pores on the bottom of the leaves, the so-called stomata. This allows the plant to breathe in carbon dioxide.

Chlorophyll B, on the other hand, is extremely sensitive to red light. Red is at its brightest around a wavelength of 660nm and is therefore the most efficient wavelength for plants. Red light is just as good for stimulating photosynthesis as blue light. But there are differences. Plants that only get red light during growth will stretch. Red light plays a crucial role for the flowering phase, because it activates phytochrome. This regulates the biological clock of the plant and is necessary to allow the plant to grow towards the light, to produce chlorophyll and to stimulate leaf growth. [5]

UV-light and the effect on the Growth of Weed Plants

In addition to visible light, the sun also emits invisible radiation. Heat in the form of invisible infrared light and ultraviolet (UV) light. Much of that UV light is harmful to both people and plants. The ozone layer protects all life above water from the harmful part of this radiation. But not all UV light is equally harmful to plants.

On the Internet there is a rumour that UV-B, a certain part of the spectrum between 280 and 315nm, would increase the THC content. But so far there is no direct evidence for this. Invisible UV-B light is not 100% blocked by the ozone layer. So it could be that the weed plant has evolved to use UV-B radiation. We just don't know exactly how and for what. What we do know is that UV-B influences the growth of cannabis. Indoor growers just don't have to do anything special for it. With the exception of the LED grow light, all types of lighting emit a very limited amount of UV-B. So if weed plants are already using UV-B, in most situations it is not necessary to hang extra UV-B lamps in your growing space. 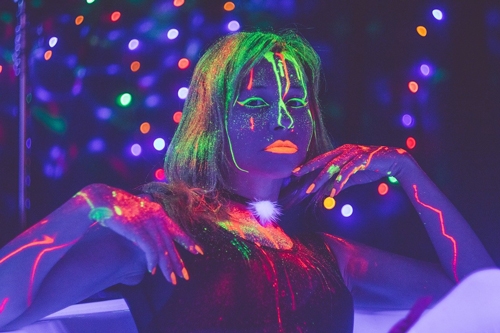 It is not necessary to install a lot of blacklights for a dose of UV light - The usefulness of UV in cannabis plants has not been well researched.

We hope that this article will help you learn more about your weed plants. Light is not a simple matter, especially when you have to explain the biology and evolution of plants in order to understand their usefulness. In this article we've cut a few corners to make growing your own weed not more difficult than it is. But especially since growing under an LED grow light is becoming more and more popular, it's good to focus on the colour of the light and the influence on your yield.

Does growing with lighting schemes really get too much for you? Then take these steps for weed growing for beginners. Everything starts with a good foundation, right? Instead grow an autoflower in the garden or put it indoors with 18 hours of light and 6 hours of darkness. With enough water and a little nutrition it can hardly go wrong. Would you like to know more about growing techniques? Take a look at these advanced growing techniques.

[1] “What Causes the Seasons?” https://spaceplace.nasa.gov/seasons/en/
[2] “The Sun and the Seasons” https://physics.weber.edu/schroeder/ua/SunAndSeasons.html
[3] “The Ultimate Lighting Guide for Cannabis Cultivation” https://medium.com/@sabinedowner/the-ultimate-lighting-guide-for-cannabis-cultivation-cc60b22df835
[4] “Why plants use Far Red Light” https://www.engineersonline.nl/artikelen/id1521-waarom-planten-verrood-licht-gebruiken.html
[5] “How Does Color Spectrum Affect Growing Marijuana Plants?” https://www.growweedeasy.com/color-spectrum-marijuana-grow-light